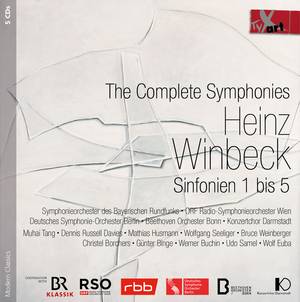 The complete recording of the five large-scale symphonies of recently-deceased composer Heinz Winbeck (1946-2019) which are released on TYXart Records, have received the “Opus Klassik" award  in the category "World Premiere Recording of the Year". This exemplary CD was also nominated for two further categories - Symphonic Recording 20th/21st Century and Editorial Achievement The award ceremony will take place on 18 October 2020 in Berlin. The event will be recorded and streamed by ZDF. – www.opusklassik.de