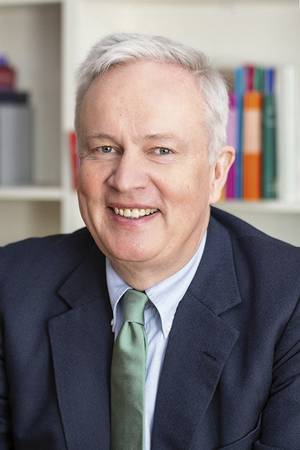 Close to 25 years Dr. Wendelin Göbel has played an important role in shaping the publishing catalogue and future programmatic orientation of Bärenreiter. At the end of February, Wendelin Göbel, who was Publishing Director at the Kassel publishing house since August 1996, has retired. Having studied Philosophy, Art History and Musicology, as well as Harpsichord and Early Chamber Music and gained publishing experience in the Holtzbrinck Group, he was predestined for his position.

Many times in his capacity as Publishing Director, Wendelin Göbel set the course together with the Bärenreiter management. Two projects stand out; the label “Bärenreiter Urtext” with its uniform design and high recognition value developed into a worldwide respected brand and can be traced back to his strategic decisions. Also, the second edition of the music encyclopedia MGG (“Die Musik in Geschichte und Gegenwart”), published by Bärenreiter and Metzler between 1994 and 2008 in 26 volumes with two supplement volumes, owes its economic success and its excellent reputation up until today to Wendelin Göbel – together with the authors and editorial team. The digital edition “MGG Online” was to a large part made possible by his commitment and persistence.

Last but not least, the Publishing Director was an advocate for the music education catalogue at Bärenreiter and Gustav Bosse Verlag, and he tirelessly pursued the publication of valuable facsimile editions of great musical masterpieces in highest technical quality.

The Management of Bärenreiter would like to thank Wendelin Göbel for his many years of service. Clemens Scheuch, who was promoted to CEO in January, thus joining his parents Barbara Scheuch-Vötterle and Leonhard Scheuch at this level, states: “For almost a quarter of a century Dr. Göbel played a decisive role in determining the fortunes of our publishing house. His prudence and ideas have sharpened the profile of our company.”

In addition to his professional occupation, Wendelin Göbel is also involved in voluntary work, e.g. as Vice President of the Landesmusikrat Hessen and – as successor to Leonhard Scheuch – as chairman of the “Bürger pro A” Society, which supports the preservation of the Kassel State Orchestra as an A orchestra and thereby the continuance of the traditionally high orchestral culture in the city of Northern Hesse.