The esprit of Opéra comique 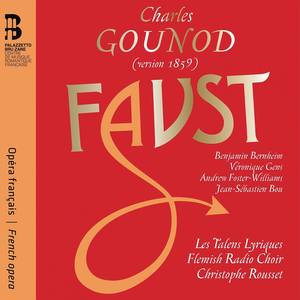 As the most convincing new recording of a 19th century opera, the first recording of Gounod’s masterpiece in the original 1859 version, which is released on the Palazzetto Bru Zane label, has received the "Opus Klassik" 2020 award.

This recording is based on the version first edited by Paul Prévost for Bärenreiter which contains spoken dialogues and in part newly-discovered vocal numbers, embodying the esprit of Opéra comique much more than the later through-composed version.

A hand-picked ensemble of singers along with tenor discovery Benjamin Bernheim as Faust, who also received the "Opus Klassik" award for best up-and-coming singer, Veronique Gens (Marguerite), Andrew Foster-Williams (Méphistophélès) as well as the French elite ensemble "Les Talens Lyriques" under the direction of Christophe Rousset perfectly match the tone and spirit of Gounod's "Urfaust".

The printed score will shortly be published as part of the "L'Opéra français" series. A high-profile scenic premiere has been secured: Chief conductor François-Xavier Roth will conduct the new production by Johannes Erath at Cologne Opera scheduled for 23 May 2021