Reunited for the first time in 190 years 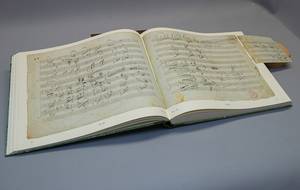 “Unintelligible, like Chinese”, a contemporary Viennese critic remarked on the premiere of Ludwig van Beethoven’s “Große Fuge” op. 133 in March 1826. Before Beethoven penned a more concise finale, the “Große Fuge” concluded his String Quartet in B-flat major op. 130, a remarkable work in every sense of the word and one of the boldest of its time. With its six movements, it defies traditional form and today, it is regarded as a pinnacle among Beethoven’s late string quartets.

After the composer’s death, the original manuscript suffered a strange fate. It was separated into movements and distributed to different owners. The parts of the autograph strewn across libraries in Europe and the United States have now been reunited in this facsimile edition for the first time in over 190 years.

The Bärenreiter facsimile (BVK 2464, Euro 349.00) is rendered in high-quality colour printing, reproducing the autograph in such detail that Beethoven’s correction process where he pasted over previous entries becomes evident. Without disturbing the bibliophilic overall impression, movement and measure numbers have been added to each page to facilitate usage. An Introduction by renowned musicologist Ulrich Konrad elaborates on the work’s distinctive features and its history.