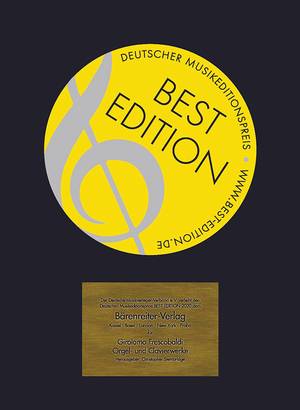 Bärenreiter has won a "Best Edition" prize which is awarded by the German Music Publishers Association for the edition of the "Organ and Keyboard Works" by Girolamo Frescobaldi (1583–1643).

Together with Jan Pieterszoon Sweelinck, Frescobaldi is considered the most important composer for keyboard instruments during the first half of the 17th century.

Each of the four volumes of the Frescobaldi edition edited by Christopher Stembridge includes a detailed Introduction to the genesis of the works, the source situation, performance practice issues as well as a Critical Commentary. With this edition musicians have the opportunity to rehearse and perform Frescobaldi's music at the cutting edge of musicology.