Three pianists in the name of Wolfgang Amadé

Bärenreiter special prizes at the Mozart Competition in Salzburg 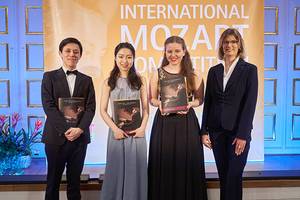 There was a home victory for the young Austrian pianist Elisabeth Waglechner (photo: 2nd from right) who won first prize in the 14th International Mozart Competition Salzburg in the category piano. The renowned jury headed by Pavel Gililov awarded the second prize to Su Yeon Kim from Korea (2nd from left) and the third prize to Yu Nitahara from Japan (left). All three had performed one of Wolfgang Amadeus Mozart's piano concertos in the finale which took place on 11 February in the large hall of the Mozarteum Foundation. Ulrike Schermuly, Bärenreiter Director of Communications (right) presented all three finalists with a Bärenreiter special prize in the form of a generous voucher for Bärenreiter sheet music.

In the category horn, the winners have now been decided. The first prize was awarded by the jury to Haeree Yoo from South Korea. The second prize went to Daniel Loipold from Austria and in third place came Adrián Díaz Martínez from Spain. All three winners also received a Bärenreiter Urtext prize.