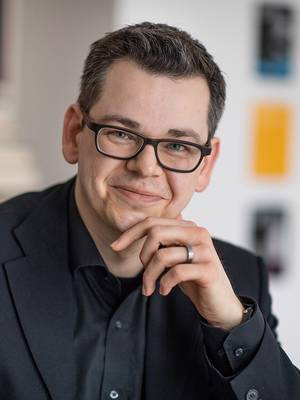 Clemens Scheuch, who has been a member of the Executive Board since 2011, has now become the third Chief Executive Officer (CEO) of the Bärenreiter publishing house effective as of 1 January 2021, thus heading the Kassel-based music publisher together with his parents Prof. Barbara Scheuch-Vötterle and Leonhard Scheuch.

Clemens Scheuch (* 1980) is a trained sound engineer. In 2007, he initially joined the well-established company as Assistant to the Management. At the time he was primarily responsible for the areas of sales as well as product controlling and was General Manager of the Kassel Groß-Auslieferung which is a part of the Bärenreiter Company Group. Soon after, he started to dedicate himself to the development of the new media business by counterbalancing Bärenreiter’s existing high-quality print editions with digital products.  In an organic process of change, that ensured the continued existence of the soon to be hundred-year-old publishing house with 150 employees in Kassel, Prague and London, he progressively expanded his activities into all areas of the company's operations. Clemens Scheuch became CEO of the Kassel Groß-Auslieferung in August 2014 as well as of the subsidiaries Bärenreiter Basel and Bärenreiter Ltd., Harlow/Essex, England in August 2014 and June 2016 respectively.

Not only has Clemens Scheuch been appointed CEO of Bärenreiter, but at the same time he now holds this position for the stage agency Alkor-Edition and Neuwerk Buch- und Musikalienhandlung.

Clemens Scheuch is Vice President of the German Music Publishers Association. There and at Bärenreiter the focus of his activities currently lies in handling the ramifications of the Corona crisis which has considerably affected all music publishers.

Bärenreiter was founded in Augsburg in 1923 and has been based in Kassel since 1927. It is one of the largest music publishers in the field of classical music and operates worldwide. Above all, the publication of Complete Editions, Urtext editions and the continuous support of contemporary music have earned Bärenreiter great international renown.