The rediscovery of the “Messe solennelle”

It was a sensation when the manuscript of the “Messe solennelle”  was rediscovered in 1991. An occasion for the editor to look back.

The discovery of Berlioz’s “Messe solennelle” of 1824 was one of the most surprising musicological revelations of the later twentieth century. Although it was twice performed during Berlioz’s lifetime and is fully described in his “Mémoires”, the music itself was lost until 1991 when Frans Moors discovered the manuscript in the church of St Carlus Borromaeus in Antwerp. This led to its first publication in 1993 by Bärenreiter-Verlag as Volume 23 of the “New Berlioz Edition”, edited by myself, and its first performance in modern times in St Petri cathedral in Bremen on 3 October 1993 under the direction of John Eliot Gardiner.

It was all the more surprising since Berlioz had clearly stated in his “Mémoires” and in letters to his friends that he had destroyed the work. He said the same for most of his early compositions, such as the “Cheval arabe”, the opera “Estelle et Némorin”, the oratorio “Le Passage de la mer rouge”, and the dramatic scene “Beverley ou le joueur”. Perhaps all of these were destroyed; they have never been found. But after the second performance of the “Messe solennelle” in the church of St-Eustache in Paris in November 1827 Berlioz clearly intended that the work should not be performed again, and he probably destroyed the choral and orchestral parts. But the autograph score he gave away to the Belgian violinist Antoine Bessems, who probably played in the 1827 performance, and perhaps never gave it another thought.
Bessems died in Paris in 1868, leaving the Berlioz manuscript to his brother Joseph, who was organist at the church of St Carlus Borromaeus in Antwerp. After Joseph’s death the manuscript remained unnoticed in a chest in the organ gallery until 1957, when a church official made an inventory of the music in the chest. It still did not attract attention, but when Frans Moors saw it in 1991 he was immediately struck by the note on the cover which declared that the manuscript was entirely in Berlioz’s hand. By reporting his discovery to Bärenreiter-Verlag he earned the gratitude of the many thousands who have now had a chance to hear this fascinating music.

A modern premiere was arranged to take place as part of a festival in Bremen in October 1993, given by John Eliot Gardiner with his Orchestre Revolutionnaire et Romantique and the Monteverdi Choir. A European tour followed, with performances in Vienna, Madrid, Rome and London, and the last of these was televised and recorded. 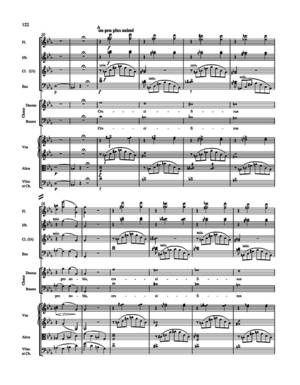 When this music was resurrected in 1993 no one expected a masterpiece. Nor did anyone expect the number of passages that later works borrowed from the pages of the “Messe”. I will never forget the experience of first reading through the manuscript in Antwerp in 1992 and finding passages from the “Symphonie fantastique”, “Benvenuto Cellini”, the “Requiem” and the “Te Deum” jump at me from the page. One movement, the “Agnus Dei”, was transformed almost unchanged as the “Te ergo quæsumus” in the “Te Deum” of 1849, so Berlioz was clearly not displeased with the entire work.

After twenty-five years of familiarity with this youthful work, most judges of the music would agree that it is brilliantly original, but also immature in many respects. Berlioz’s writing for chorus is clumsy, and the music’s indebtedness to his teacher Lesueur is quite pronounced. Berlioz knew, in 1827, that he was about to write music of far greater importance, and that his reputation should not rest on such a piece.
After its first performance in modern times in 1993, the “Messe solennelle” was eagerly taken up by choirs and conductors all over the world. Within three years it was performed in over sixty cities in all continents of the world. Performances are less frequent now, and they are usually given by choral societies eager to try a work by Berlioz that makes fewer demands than the “Requiem” or the “Te Deum”. Few of the world’s top conductors have taken it on, although John Eliot Gardiner’s interpretation has set a high standard for the rest to follow. Seiji Ozawa and the Boston Symphony Orchestra played it in October 1994 and then took it to New York and Tokyo. More recently it has been conducted by Riccardo Muti in Paris, Luxembourg, Munich, Vienna, and three times at the Salzburg Festival in 2012. An early advocate of the work was the French conductor Jean-Paul Penin, who performed it in many French cities, as well as in Poland and South America. Commercial recordings have been made by Gardiner, Penin, and the American conductor Reilly Lewis with the Washington National Cathedral Choral Society. When Lewis gave the first American performance in Washington in May 1994, Frans Moors, who had discovered the manuscript, was invited to attend as honoured guest.