The Portraits of Hector Berlioz


Hector Berlioz was a person of great public interest. He was often painted, drawn, photographed and caricatured. “The Portraits of Hector Berlioz” which is also volume 26 of the „New Berlioz Edition“ contains 122 portraits of this composer, including paintings, medals, busts, woodcuts, drawings, lithographs, photographs and caricatures. It also presents several doubtful or spurious portraits. 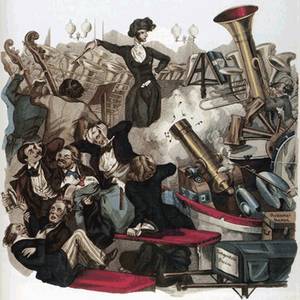 Each reproduction is accompanied by information on its date, artist and present location. This collection of all known Berlioz portraits sheds entirely new light on the life and surroundings of the great French composer.
“The Portraits of Hector Berlioz” is the first collection of all the portraits made of Berlioz during his lifetime. It ranges from photographs, formal paintings and drawings by way of woodcuts and lithographs to the many caricatures which his striking appearance attracted. Each picture is accompanied by a full description and thorough documentation of its location and history, details of the artist's career and relationship with Berlioz, an explanation of the circumstances of the picture's creation, and much else in the way of relevant comment. This documentation also sheds light on the development of photography and its position in the society of the Second Empire , as well as on the emphasis on caricature in the often satirical journalism of the day. Where they contribute to the appreciation of the picture, the articles which the caricatures illustrate, or extracts from them, are also included in an Appendix. Some of the pictures are published for the first time and many for the first time in colour.

As well as being fascinating and often entertaining, the collection adds to our understanding of Berlioz's life, times and the circumstances in which his music was composed and performed.